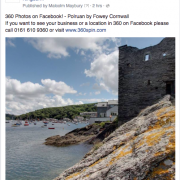 Exciting developments for panoramic photography as it’s been announced by Mark Zuckerberg that Facebook’s feed now supports Facebook 360 photos. Click the image to see this in action. www.facebook.com/360spin/

We were previously able to embed a tour on a separate page within Facebook but this is the first time virtual tours will be seen in Facebook users feed and timelines.

Its great news for 360 Spin as this gives an additional outlet for our work and gives greater exposure for customers 360s on a leading social media platform.

Clients can share their premises with a greater audience compared to their website, making the tours even more accessible.

When people are engaging with Facebook they are more inclined to interact with the tours than say within an ordinary website. Interaction on Facebook flows naturally and so leaving comments, sharing and liking tours will increase exposure, engagement and audience interest in a business or location.

We can use photography we’ve created for tours in the past and give them a new lease of life in the Facebook format. And we can shoot new panoramas to order to use on Facebook, which will also be useable on websites too.

The Google Streetview tours we produce, we’ll also be able to utilise, by pulling out a single panorama and uploading it in the Facebook format.

We look forward to sharing more Facebook 360 photos with you!