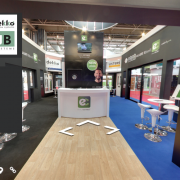 The FIT Show at the NEC is the must see event for fitters and those in the window and door trades. The guys at Listers had been preparing for months to exhibit there this year and our virtual tour enables the team to capture all this hard work before the stand is broken down. The tour takes a complete walk around the stand which was shot just before the show opened and incorporates all the features the team wanted to showcase.

Incorporated in to the tour is an overlay which adds navigation, branding and information boxes. Listers utilised this feature to highlight the stands many door and window displays, which have all been marked with hotspots to label the product names and features. Now that the actual trade stand is no longer available to view the website displays the virtual tour 24/7 for those that missed it and also enables potential customers to browse the products in an interactive and engaging way.